Debute for Nicole in Marathon

Ten-year-old Nicole Dosanjh will be making her debut in ranking Marathon Kayaking on Sunday at the Elmbridge Marathon, marking The Sharks Return to Marathon after a gap of two years. 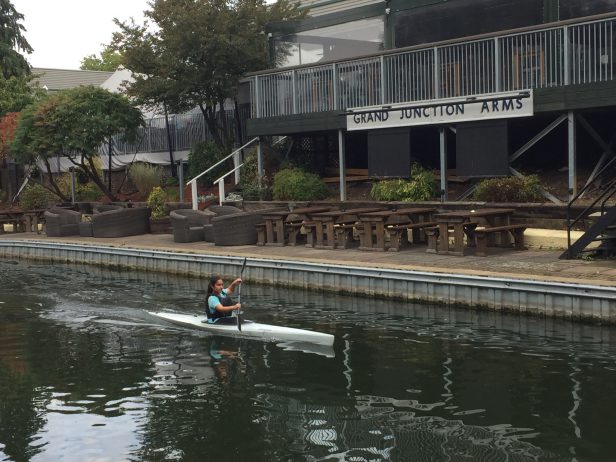 Nicole is a pupil at Featherstone Primary School in Southall and started canoeing at the after-school club run in conjunction with The Sharks. She will be racing in Division 10 (entry level for under-12s) at the race taking place on the River Thames.

Nicole regular attends the sessions held at Southall every Tuesday at 5pm, she has previously raced in  races the friendly races the Club has hosted at Havelock and NW10. Why don’t you come along to our sessions and join in the fun and next time it will be you racing for The Sharks.

Let’s Get Active #thesharkschallenge After two weeks of lockdown, we need to look at how we can be active. Exercise options are restricted, but we hope that you are getting out for your permitted daily exercise. But … What are you doing the rest of the day?

Well for The Sharks, with your help At this difficult time, more people than ever are shopping online.

Hope in Southall The Sharks are supporting Hope for Street Homeless in Southall and are asking you to make a donation via their website.

Warm Up Exercises for Paddlers

Let’s Get Moving From our Slalom Coach Rick Moore, for those of you missing your regular fix. A short video of hime going through some simple warm up exercises which are suitable for all, so let’s get moving. Please send us some videos of you exercising during lockdown. #thesharkschallenge

What Next? The first tentative steps have been taken by the Government to re-open England for business and recreation, but there is along way to go. The Current status of canoe-sport is on our Covid-19 page.

Coronavirus Policy All sessions are cancelled until further notice. The Government has changed advice and restrictions regarding exercise in England, please note this only applies to England. In response British Canoeing have also updated their advice, which can be read below.

Join in the Fun and the Exhilaration of Canoe Slalom! The Sharks have a thriving Canoe Slalom section, operating from our base in at Troy Lake near Harefield, we use the facilities of Rickmansworth Sailing Club. Access is from the A412, Denham Road, alternatively you can park at the Coy Carp and walk along the canal, END_OF_DOCUMENT_TOKEN_TO_BE_REPLACED